This was an experimental target, which was created by a friend of mine (here called Phrenorium). It is a non-physical construct that he visualizes, manifests, and expands over time in meditative states. His intention was to obtain a kind of verification of the “authenticity” of his construct by means of RV, ie, whether other people could perceive or visit it extra-sensually. Here is his own description, which he gave me after the session:

You have been in an astral world created by me that has been increasing in stability for years due to interaction on my part. The world has now become quite complex, and 1-2 years ago I then decided to materialize out of my head into a real sphere outside of this dimension so that “living things” can nest there. Anyway, I’ve send you to a mountainous area with a cave … I can also do a sketch for you. Anyway, from this cave you have a perfect and sublime impression of most of my astral world. I enjoy this view more often…

The TARGET ITSELF is the heart of my world or one of many. It is a special type of “etheric generator” that has been installed to keep the world stable and upright without my intervention. It consists of a spherical crystal, usually in the color light blue when activated by me, sometimes in purple (to tie my consciousness there, which allows me deeper impressions) this sphere is mounted on a long bright obelisk-like rod, which approximately 1.40 is big (then comes the sphere about it). The room itself is just a cave in these mountains.

He also drew the following sketches: 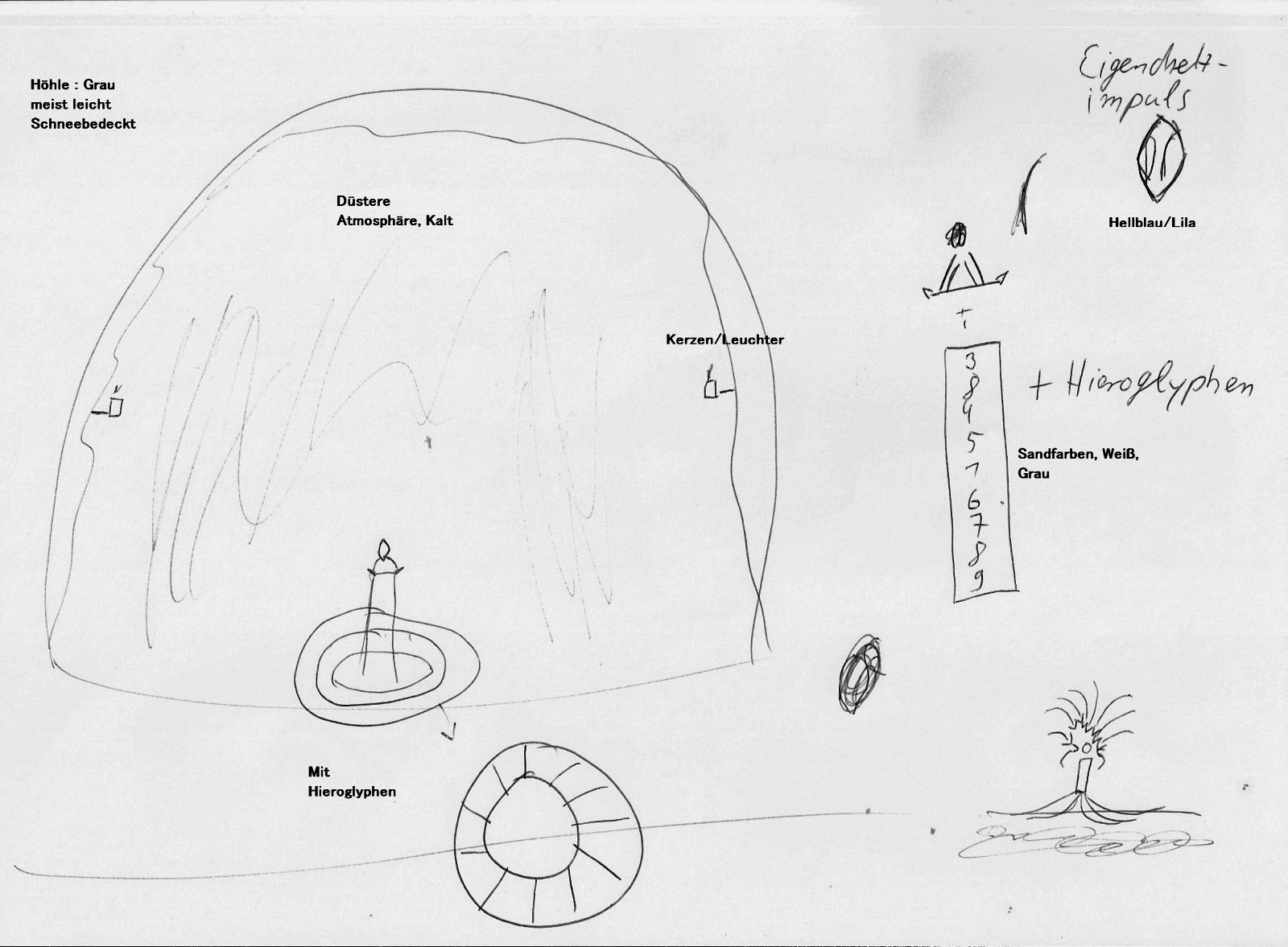 Sketch of the “Cave” (Target)

And now for my session:

My session consisted of a standard procedure up to stage 4 (Stage 1 twice), a closer look at [x], [a] and [b.] Aspects, and a stage 6 relational diagram on one of the target properties. At the end I tried an analytical sketch of the overall impression and made a conclusion. 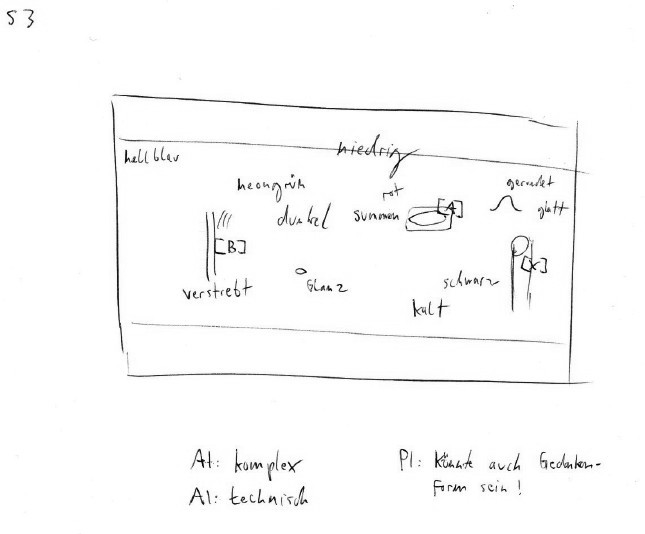 AI: complex
AI: technically
AI: could be an astral form!

Although the impressions appeared rather physical at first, I had a feeling that I knew more likely from metaphysical targets (consciousness, emotions, etc …). They were already “solid” structures, but somehow different (more volatile?) than within physical targets.

My main interest now fell on three components of the scenario, which I examined again individually with [x], [a] and [b]. But before that, I made a stage 4 on the target in general: 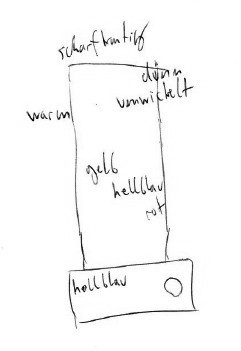 Impressions of stage 6 [x] (per relational diagram) on the term “specific function”:

Specific function -> What does it do?
Picking up, guiding inwards, handing it over somewhere

Somewhere -> Where to?
Down, pedestal, pipe, or in the ground

What for?
Filling, pouring, substrate (?)

Note: The word “substrate” came to mind spontaneously, without me knowing what it meant at the moment. Something like that happens to me rarely when viewing. By definition, a substrate can be a foundation for something, such as to enable or sustain something. The object studied with [x], according to Phrenorium, serves as a kind of “etheric generator” that automatically keeps its non-physical construct stable, even when it is not working on it, or paying attention to it.

Impressions of Stage 2 [a]

AOL / S: like a ring
AOL: moon landing (came to me there spontaneously)
IT: holding something, readiness, just unused
AI. meets its purpose 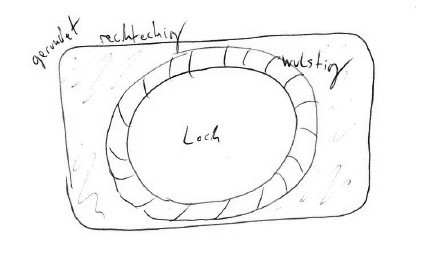 This seems to be the circular area around the etheric generator (see sketch), but I perceived this element separately. I even had the impression that it was stuck in the air, but unfortunately rejected it without writing it down because it seemed too absurd.

Impressions of Stage 2 [b] 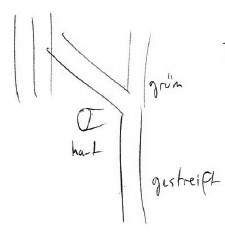 This aspect may fit the forest that is present in the construct. However, this is outside the cave, so not in the immediate target area. But I did not seem to have been attracted to the aspects that I found interesting in the area because of the lack of exercise. 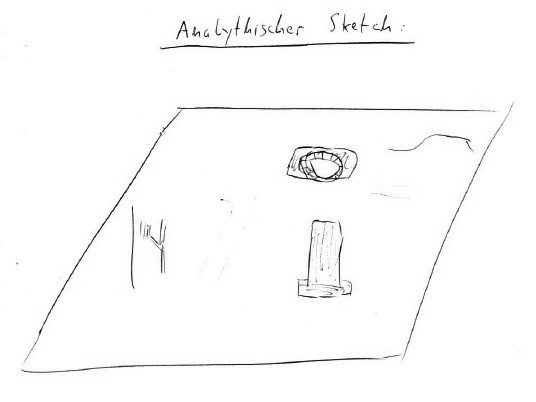 An attempt to reassemble the individual aspects in position.

Conclusion: The target resembles complex, artificial structures on an equipped area. These structures have different functions. They do not do much for itself. They contribute something. Like a complex technology. Could be a circuit board. But they are unusually dark, and high / far. Maybe very big. Could also be thought forms / astral constructs!

The session shows that it is indeed possible to view non-physical or metaphysical realities and specific functions inside it. However, they also seem to have some consistency or manifestation through repeated “charging” in order to get accurate data.