I’ve sent four viewers to the mysterious circular structure in the Baltic Sea. All sessions were conducted up to Stage 6. A few background information on the subject can be found here (in german language): 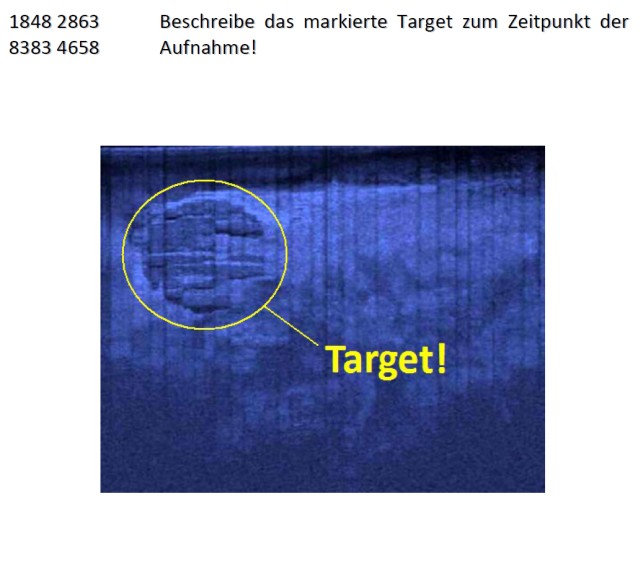 This session took place just before the first dive photos of the Baltic Sea Anomaly were published. Perceptible was the circular structure, which could be more or less differentiated from the surrounding seabed. It also showed something like a hollow funnel and crags that were either on the object, or inside the object (or both). In the properties of these tips, or the whole object itself came out something like “chemical processes”, and “temperature fluctuations” (eg clear cold inside the structure). Also, a sense of “radiation” has been felt, but it is not clear whether it is thermal or radioactive radiation (or something else).

First, sketched impressions of the viewer in Stage 3. The compulsory data of Stage 1 and 2 (colors, surfaces, etc …) already fit well with the published photos . The viewer has subsequently labeled the sketches for readability: 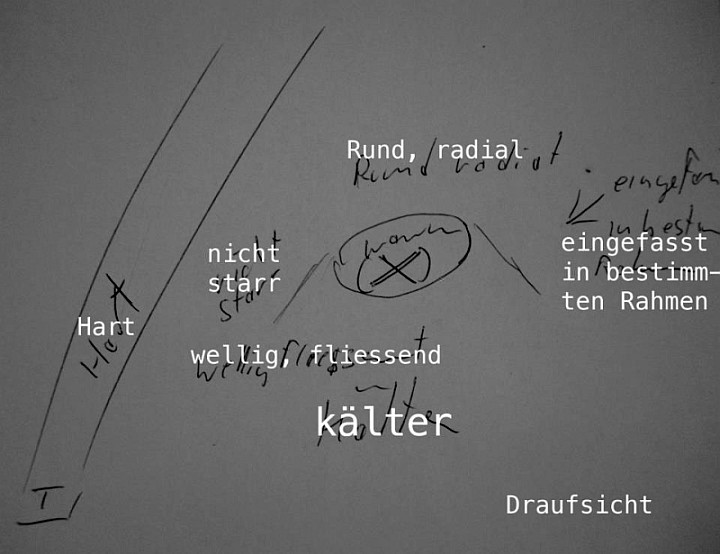 Later, we examined the structure in detail after moving the viewer slightly outside of it to see if he perceived the seabed around it. A funnel-like structure in the interior came into view: 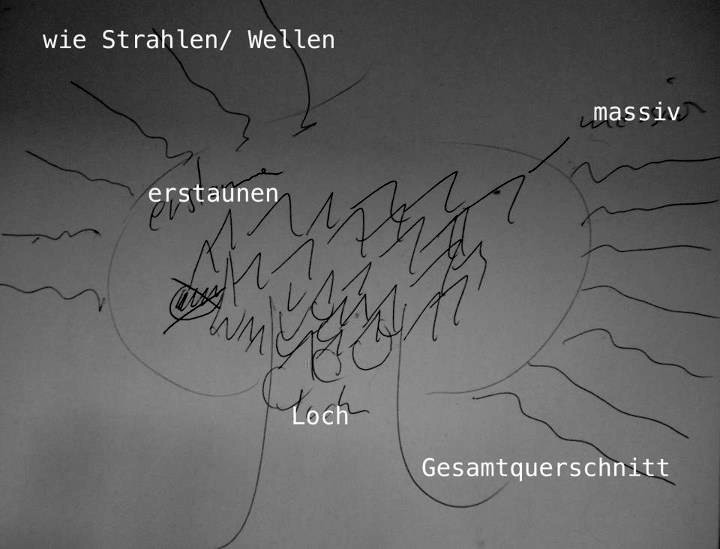 Here is the impression again in cross-section, with the perception of the above-mentioned “lace” inside. The viewer also perceived a kind of circulation, which is also drawn: 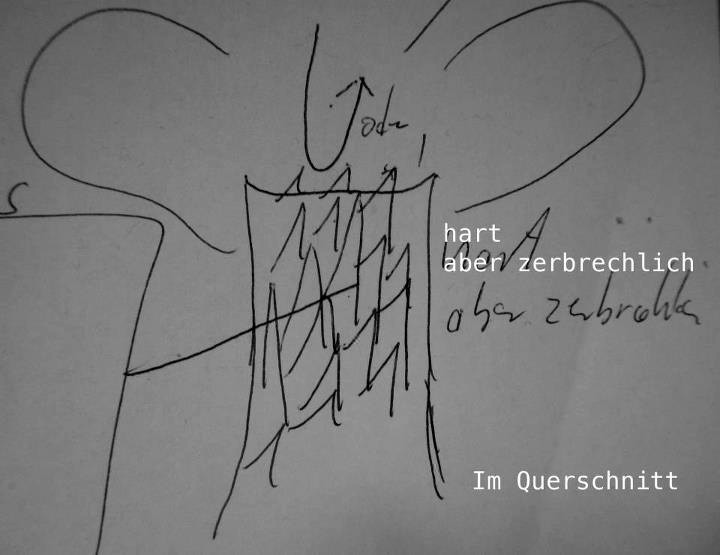 Now one of the “tips” in detail. It showed a kind of flow or circulation inside. Whether it is water, radiation or another form of energy, it is unclear: 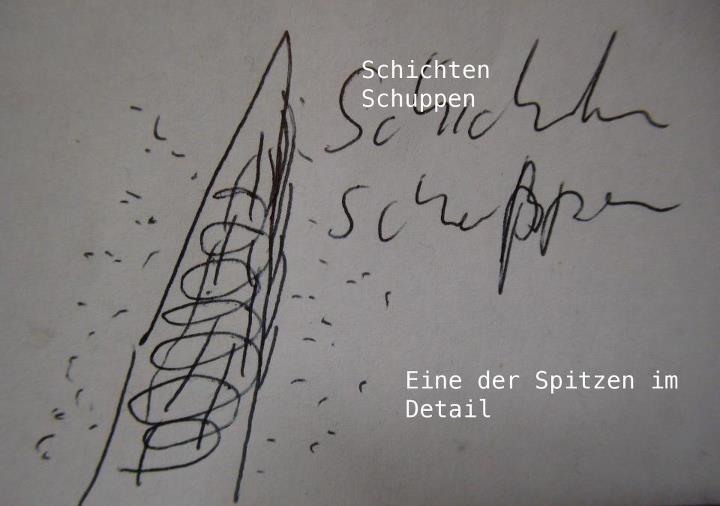 In the end, we also investigated several options for the target via the action line. Essentially it came out that the structure was used by a group for the extraction of something: 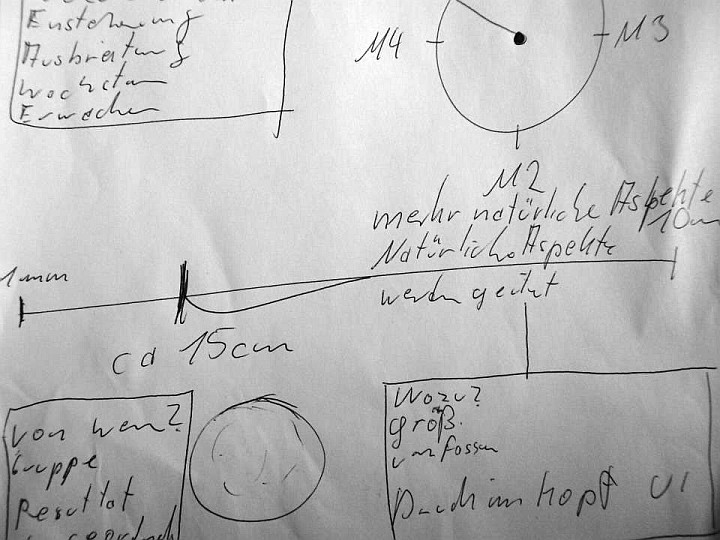 Summary: In a single session on such targets, of course, not much can be said. But apparently the viewer was on target, and generated some essential data that would later become interesting for comparison purposes.

This time a circle structure was percieved again, but it looked much more artificial than in the previous session. But the viewer always had the impressions “artificial and natural”. Interesting or were box-shaped, arranged around the circle structures that looked hollow. Again, a funnel-like structure appeared, which seemed to lead us nowhere (we did not find anything down there, also no ground). In addition, there is a slight pull there, but not so strong that he could suck a human (that’s what the viewer felt). And in the funnel itself it is considerably colder than it is outside.

After the viewer first appeared somewhere in the murky water, and did not notice anything from the actual target, I did a movement command. He was already able to perceive the first impressions of the circular structure: 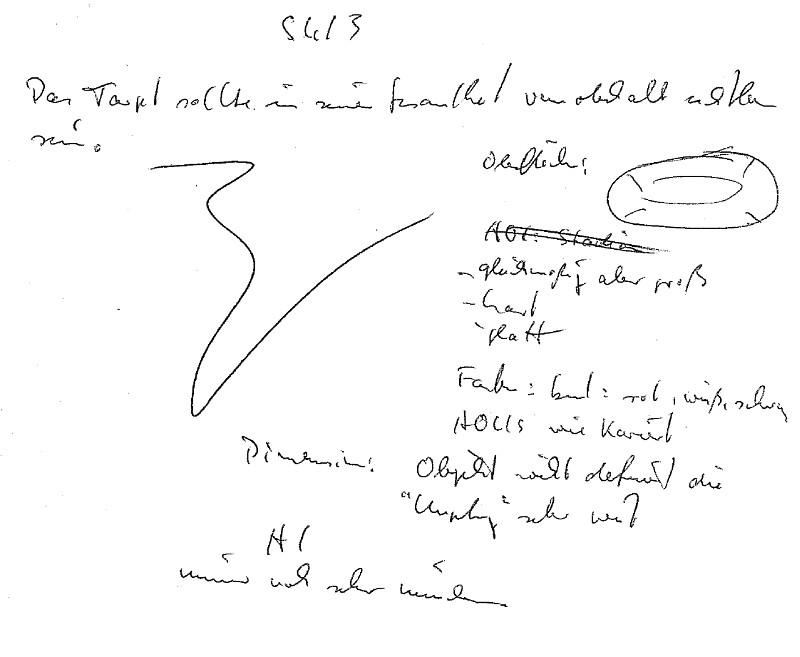 In Stage 6 , we took a close look at all the impressions collected since the movement exercise. This is how the funnel-shaped structure appeared, around which box-like objects appeared to be arranged. These acted hollow and tinny on the viewer, serving as a kind of container. In the funnel-shaped structure below it seemed to go in deep and cold. Here, the viewer also took the said suction, but which would not be strong enough to pull a man. 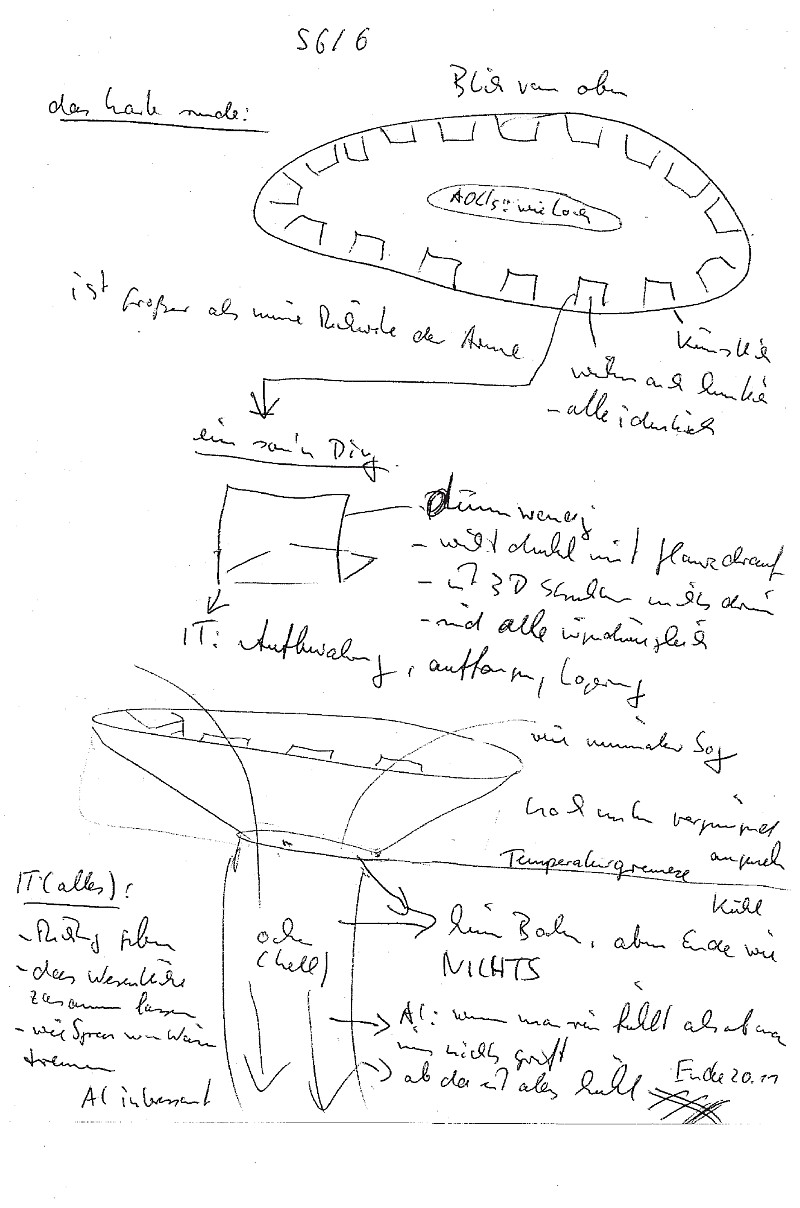 Summary: Here, after initial navigation difficulties, very interesting detail impressions were delivered from the target. Especially the aspect of the “funnel” came across quite clearly here. Compared to the first session, a picture of a circulating process or exchange (of whatever kind) is beginning to appear rather intentional than natural (at least in its original purpose). But that should be specified.

The viewer had an immediately strong target contact, and hardly needed to be moved around in the target area to generate the information sought. Like the two previous viewers, the viewer here also perceived a circular structure on the ground, and also noticed very clearly that it is in the water. Already in Stage 1 she drew this first, rough impression of the target: 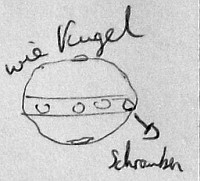 In Stage 3, the viewer then very clearly got the impression of a round structure on the bottom of a liquid, cloudy medium. Some surface details were already revealed. Only the size estimate (70cm) was still deceptive, but later she noticed that it looks much bigger (see below). Interestingly, she also found the target “lost”: 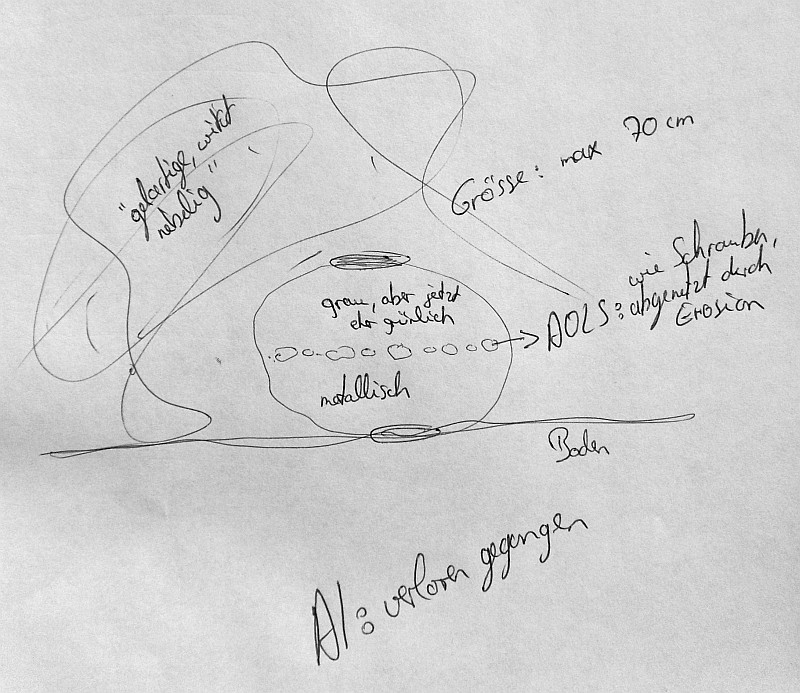 Finally, in Stage 6 , we focused completely on the structure and made it as detailed as possible: 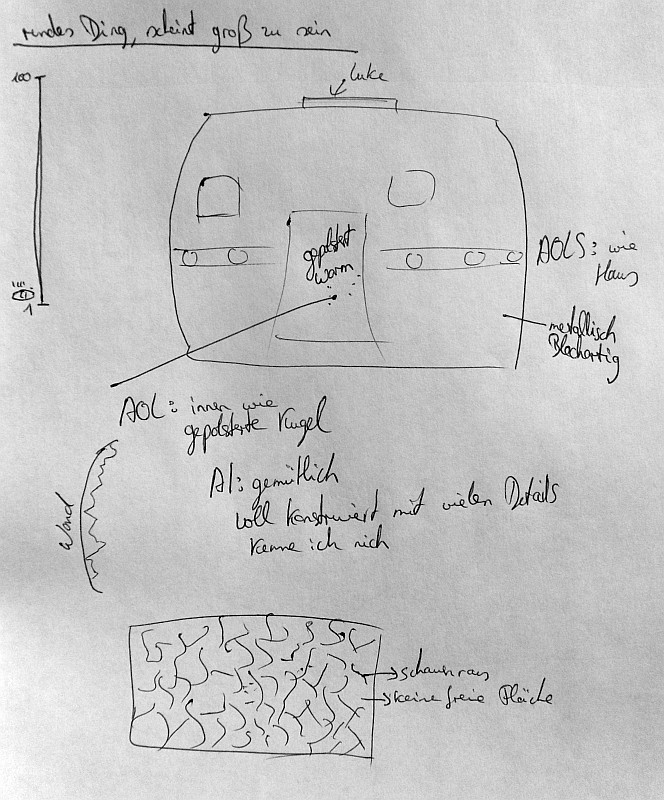 The viewer almost saw the object as a house or dwelling, except that it was metallic in appearance. It showed something like well-kept rivets and angular structures on the outside, as well as a kind of opening or hatch on top (top picture). There was also something on the side, which could have been a door or an entrance. Then I let her look inside the structure (bottom picture), which she found very unusual. They look like a strangely upholstered and cozy environment made up of exotic, cleverly designed and constructed structures. The structure seemed to have a deeper meaning.

When we investigated the purpose of this structure and the object itself, it first came out that it originally had a different function, but now serves as a “shelter” for any living thing. We looked at the creatures for a moment, and they looked worm-like or snakelike, which might indicate marine animals (eels, worms …) now living in, around, or below (the actual interior did not seem to be filled with water). But of course we also wanted to know the original purpose of the object.

When we did this, the following came out (quote):

What was the original function?

– Emit something, serve to tap or draw energy
– One puts oneself in, and lets it work on itself
– Inside, it’s like something magnetic; It’s supposed to strike you when you get in the act
– Energy flow, as if all your polarities align themselves

In the context of today’s “purpose”, it still came out that it was the “last source” of this species, and the creatures living in it (animals?) are there because of it, want to have to do. In any case, this impression indicates that you would feel energetically well-tempered inside the structure.

Then I let the viewer do a spontaneous scaling to find the approximate size of the object. The Ocean X team goes from 60m (~197ft), if I remember correctly. Here is the result of the viewer (~ 65m or ~213ft):

Then I had a timeline done to find out the approximate age or timing of the genesis (which, mind you, is not always reliable, it’s not always as literal as a yardstick, because “pinching” can also occur). The impression was “a few hundred years” , which fits one of the previous sessions. We roughly measured it to 1300 AD. But only under reserve, because at the moment we had problems with our Skype connection (which can bring out a viewer strongly). 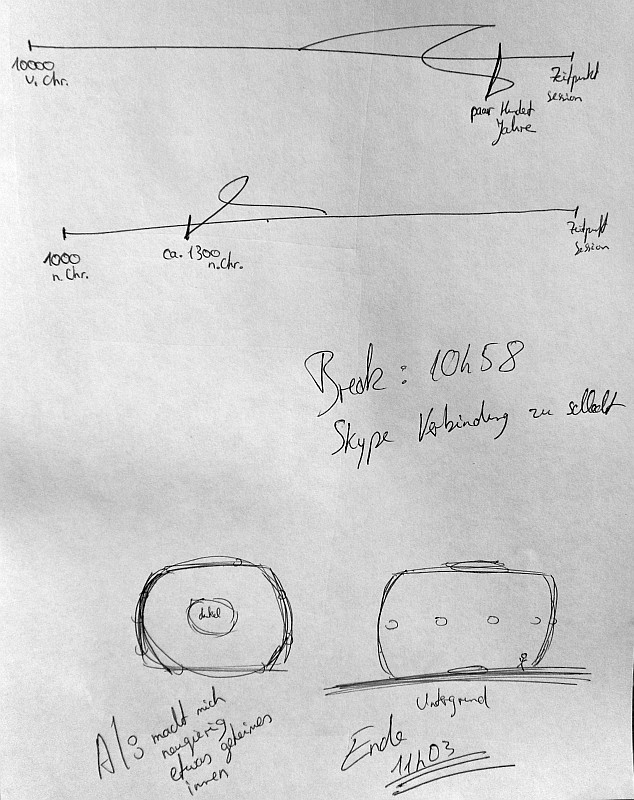 Below, I let the viewer again make a summary sketch in plan view and side view. As a final AI (emotional conclusion) she had “makes me curious – something secret inside” . Then we finished the session.

Summary: One could now speculate from this detailed session that it is a kind of forgotten / lost technology, which was used for energetic purposes (see pyramid energy and the like). But from Baltic volcanism to ancient secret knowledge it would be a big jump. It also shows why it is so important to make several sessions on such “mystery” targets, as each viewer looks at individual aspects of the target (depending on the interest of the subconscious), and only a lot of impressions make an evaluation possible.

This viewer got the same target but with new coordinates (because the monitor did not have the old target at the time): 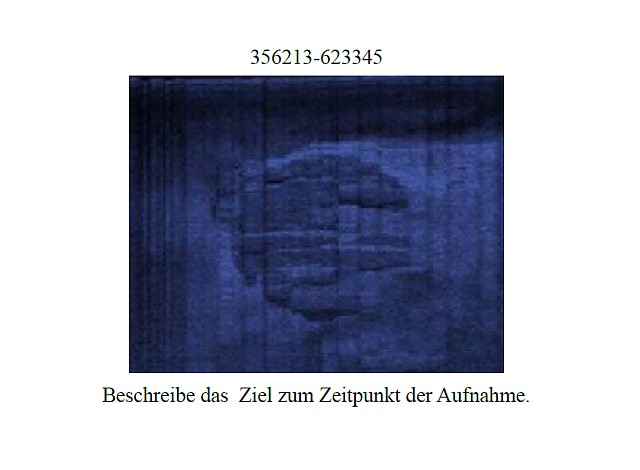 Here as well, the first stages showed similar data as in the previous three sessions. In Stage 3 , the target was again drawn very clearly, this time with seabed: 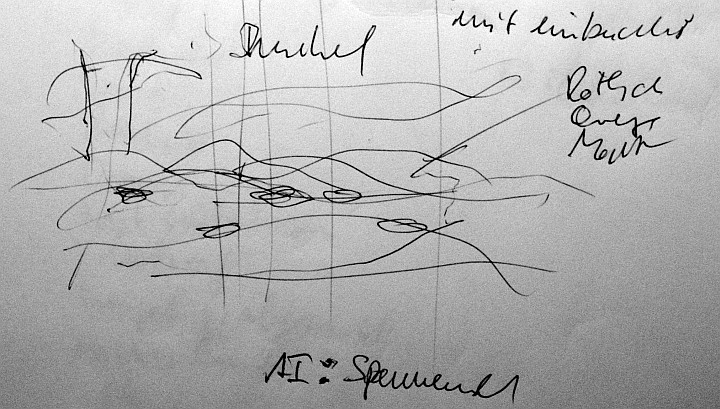 In Stage 4 , the AOLs “Mars” and “Baltic Anomaly” appeared, which hopefully did not affect the other data. The viewer found something exciting, which was then examined in detail in Stage 6 . This turned out to be the round structure on the seabed. It was perceived as “smooth” and “artificial”. As AOL came at the point “Land Mine”: 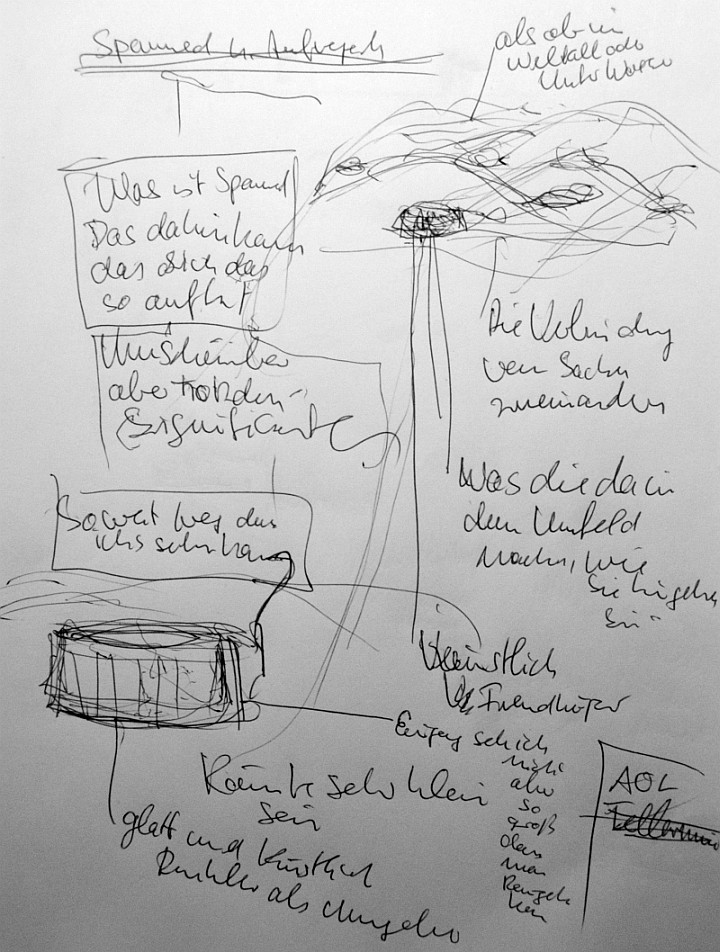 A movement command was performed that centered the viewer on the actual target. The structure was clearly perceived as artificial here: 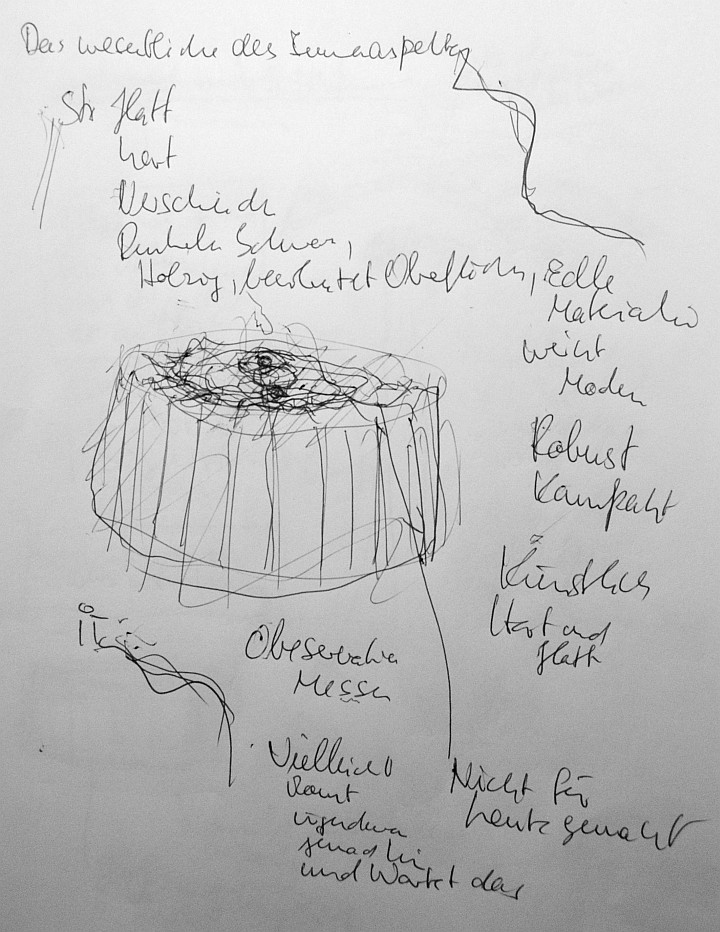 The ITs showed the aspects “observation” and “measure”. The viewer also had the impression “not for people”. Furthermore, he had as AI “Maybe someday someone will come, and wait for that”. In addition, the viewer mentioned that he felt like under water.

Summary: Here you were on Target, because the circular structure was clearly hit again. The mandatory dates and sketches are very much in line with the other sessions. The impressions from Stage 6 are to be interpreted with some reservations, since the AOL “Baltic Sea anomaly” already occurred in Stage 4. To what extent the viewer could solve it, I do not know. But in any case, it is another verification that there actually exists a circular structure on the bottom of the baltic sea, which is unusual.

Preliminary overall summary:
The Baltic Sea Anomaly proved to be quite persistent target. From the sheer quantity of data, it could go in the direction of an ancient building that had a certain energetic (perhaps technological) function. As interpretations there is, for example, a kind of power place or device for energy healing, or a temple that had more ideal or informal value. Strangely enough, our timelines to date point to a time between the early and early Middle Ages, which makes the position of the object puzzling. Because at that time there should already have been water there (in contrast to the ice age, for example). If there are more usable session results, the project will be updated …