In connection with the topic “Lilith”, which was dealt with in depth in another forum a few months ago, Bazur and I did a remote viewing session on this very entity or energy. Although we clearly stated that we did not make any claims to the accuracy or correct interpretation of the data, our session results were not wanted by the administration there and were ultimately even deleted. For this reason, I will leave out the context and the exact target formulation here, as I respect the wish (as irrational as it may seem). I’m going to publish the essence of the session here because otherwise it would be a shame about all the work we have done for it. Maybe someone can do something with it…

So here are just the raw data with a couple of neutral explanations of our impressions:

Bazur was my viewer, who of course was blindly aimed at the target. The target task was as follows (an addition relating to the forum mentioned above has been removed):

“Describe the entity “Lilith” that appeared in connection with the […] forum and make contact!”

Let us now turn to the contents of the session. First the statistical data:

From now on to the actual course of the session:
Already in stage 1 (ideogram – first approach to the target) there was a flood of data. In addition to the usual sensory impressions, some interesting AIs (the viewers emotional impressions about the target) came to light:

AI (on about half of the ideogram): jumped like level changed
AI (at the end of stage 1): balance to imbalance

In stage 2, the sensory impressions were further specified. The AI ​​in the end: As if something is waiting, arriving

In stage 3, the viewer sketches its first, rough impressions of the target. A kind of tunnel emerged here through which something is conducted (information / energy?). But the tunnel is still partly unfinished, like a construction site. Suddenly a “foreign body” shot through this tunnel construct and partially destroyed it again. This process didn’t seem to be a one-off. At first I thought of a twisting mechanism that should disrupt the true flow of data, but I didn’t want to jump to conclusions (as a monitor you keep that to yourself until the end). Here is the stage 3 sketch: 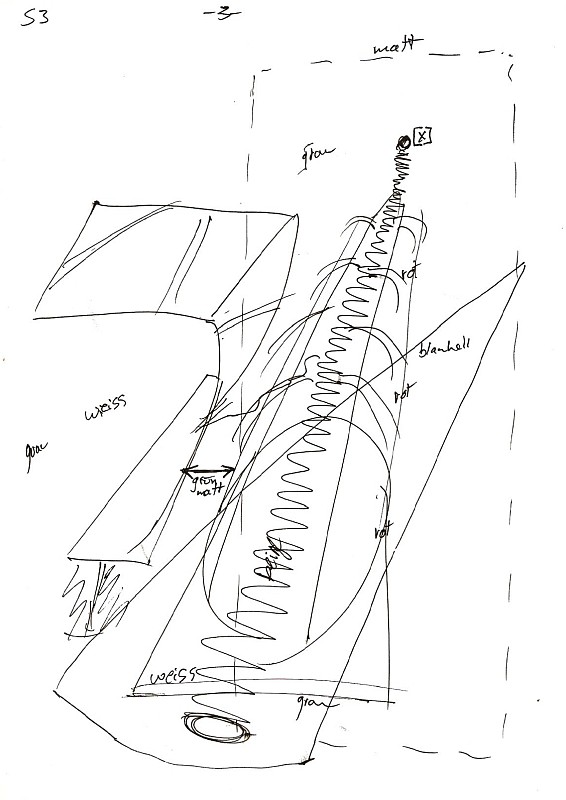 The AI ​​of stage 3 referred above all to the named “foreign body”, which caught Bazur’s attention: Chaotic, strong, foreign body

After that, we went to stage 4. From stage 4 onwards, it only really becomes concrete in the remote viewing protocol, because the previous stages are only used to approach the target. In addition to a summary of the most important, sensory impressions and dimensional data (the tunnel construct reappeared), other AIs appeared here: “romms”, chaotic, strange

Then we looked to see if there were foreign emotions (EIs) in the target. This is the general indicator of the existence of any kind of consciousness. Bazur immediately described strong impressions: anger, liberated, satisfied

The ITs were also interesting (functions – “What does the target do? What is it for? What is it for?”). There the following impressions came up: keeping in shape, speed, insulating, transporting, control, order, dissolving compact

The final AI for stage 4 was: Feeling like a prison break , rescue / revenge measure

We then went straight to stage 6 , where I instructed Bazur to examine the EIs (foreign emotions) that had emerged. These were deciphered as follows:

Anger:
suppressed,
observed,
reticent
it holds back for a long time, but the inability of others upset

Liberated (by what means ?): You are not allowed to take any
losses
into
your own hands

Satisfied (why?):
Keep vengeance prove injustice to oneself

Injustice:
underestimating
lack of appreciation
not taken seriously
it’s right and says it, but no one listens

Here we are getting closer to the matter. One issue is slowly emerging. Immediately afterwards I had Bazur make a personal perception of the “person” (P1) in the target to whom the EIs belonged. I asked various aspects, starting with the current job:

Activity:
Is torn from linen
suggests something one
rips

Then I had the appearance of the “person” described:

I then also asked Bazur to draw the person’s perceived face: 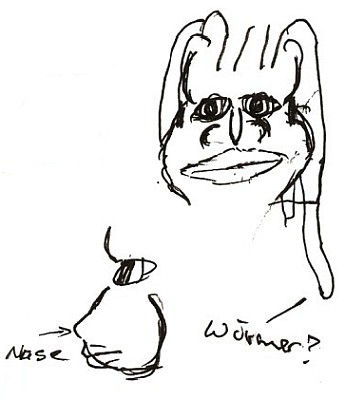 The somewhat strange facial features and hair that reminded of worms or tentacles are the most noticeable features. They reminded a bit of the Medusa myth, where there seem to be overlaps with the Lilith myth. But I’m not that versed in mythology.

Next I had the mental abilities described:

Mental abilities:
Dual output
sucks in from below, changes, and gives out above

In this case, rather abstract perceptions, apparently from the energetic abilities of P1.

Now I had the character described:

A fact that is problematic for P1 was shown visually:

As if several “channels” were necessary for the smooth fulfillment of tasks, but all but one of them are blocked. This makes the process slow and tedious.

There only the “adapter” aspect appeared again. Apparently in the sense that information is to be transformed / adapted and brought into a correct form.

Now I wanted to know exactly, and as the final tool in this session I started an “interview” with P1:

V: Hello, we would like to ask you a few questions. Do you have the time and inclination?
P1: P1 pulls me towards him (dizziness, extremely out of phase).
V: What is your current task in relation to the target environment? (Target environment = “censored” forum / community)
P1: I don’t like your density.

V: Why don’t you like the density?
P1: It should repel itself (or it should be in motion). (Forum Community) works against nature. (Example: Magnetic balls should repel each other!)
V: How can we change that, that the balls fit together ?
P1: There is no center, but a ring.

V: Why is it not a ball?
P1: The link to the environment would be disturbed. Not natural, split off, artificial = imagination / illusion.
V: What makes……… (answers from P1 came so quickly that V couldn’t keep up with the writing) (… where does the problem arise?)
P1: wishful thinking, hope, too little mass to understand.

V: What is the end goal of your current assignment?
P1: Chaos, incentive to reassemble, hint (hint through the chaos / giving an incentive to rethink / reassemble something)
P1: The rules according to which it is built are misunderstood.
V: Please brake! (Flow of information too fast)
P1: pool too small (capacity too small => target)
V: Quite possible, I understand that (throws in the monitor, so wingman)
P1: Calms down, slows down speed.
V: Thank you, we take note of the information. We try to make something constructive out of it.
P1: Gently / lovingly pushes me (viewer) away from you again.

AI: P1 is relatively sober. Not playful, but very loving.
AI: Is informative – I have to sort it.

Summary: So that was our session and contact with “Lilith”. I would like to keep my conclusion relatively short: In my impression, the function of the “Lilith” energy is to destroy false conceptual constructs and beliefs so that the “recipients” (i.e. the people, in this case the Community) are forced to put their existing information together in a new and neutral way. It could be symbolized as if something made of porcelain had shattered, people found it and put it together incorrectly (due to wrong ideas). Now Lilith smashes it again so that people have to put it back together. But this time as it corresponds to its true form. Perhaps also an analogy to the first dinosaur finds, which were put together incorrectly and the remains of mythical creatures were interpreted from them.

The point here is to neutralize errors, self-projections and unquestioned beliefs. Basically, to set something to zero in order to (more objectively) recognize it anew. Or expressed in dual terms; to reconcile the mind and rationality with intuition and newly opening “channels” (some would call it “heart connection”), and not to let one distort the other. One may assign these aspects here in the duality to the male and female principle, but perhaps one should not interpret it too figuratively, otherwise one narrows the horizon. In my opinion, what has been demonized are primarily “interfaces to knowledge”, which are archaically associated with the “female principle”. Just that what goes beyond pure “binary thinking” ordoes not deal exclusively with the physical causalities (i.e. the principles that are more masculine). The connection to the source / remembering, so to speak. But it could well be that I still have a very incomplete picture of it.

The overall essence could probably be paraphrased as follows:
“Certainties through self-awareness, instead of stagnation through beliefs.”